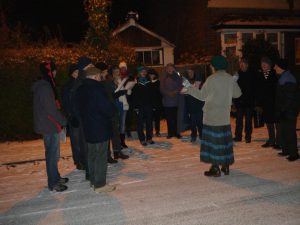 “Angels from the realms of glory” sung by six of the Carol Choir on BBC Radio Nottingham, Christmas 2018

The Carol Choir was started around 1870 by about twelve young men from the Chapel Street Church Choir, in order to collect money for Beeston Benevolent Society, but the repertoire of carols suggests a much older tradition.  They decided to sing traditional “village” Christmas carols around the streets of Beeston.  In the first instance, they sang mainly to members of the church.  The carols were mostly known only to village carol choirs in scattered parts of the country.  Research has discovered that one of them, “Angels from the Realms of Glory”, was written by a Nottingham composer, William Matthews, c.1820.  Others derive from Leicestershire, Derbyshire and Yorkshire and appear to date from the early 18th century.  The tradition among choir members is that several of the carols had been brought to Beeston by Yorkshire weavers or stockingers who settled in the village in the late 18th century.

This small male-voice choir was led by Mr Thornhill (c.1870-1910) and later by members of the Smith family, then by Ted Smith (1911-1918).  It had three singing parts:  treble, tenor and bass.  They would rehearse on Sunday afternoons prior to Christmas, learning the carols off by heart.  When Chilwell Road Church opened (in 1902), the choir practised in the Ladies’ Room (later renamed the Wesley Room).  One of the early members was Tom Attenborough, who sang tenor, and among the trebles were Alfred Redwood, Bert Elliott and Albert Burnham, all of whom continued singing with the choir until the 1930s.

The Great War (1914-1918) saw the choir so depleted that ladies were invited to join, to take over the treble parts.  A new contralto part was introduced, thus forming a four-part mixed-voice choir.  The voice parts were passed on orally to new singers, as at that time the music had not been put into written form.

From 1919 to 1931 the conductor was Walter Bostock, who set the standard for discipline and decided where the choir should sing.  The strictness for the young people was compensated by the fact that they could mix freely with members of the opposite sex in a context that would not have been open to them at any other time.  “It was the most marvellous marriage bureau that you ever did see!” recalled Margaret Cooper, who joined the choir in 1930, as soon as she reached the specified age limit of 16 (a limit later relaxed, provided that parents gave consent or accompanied children).

The village of Beeston was now a town and as our church members were spread over a wider area, including Chilwell, the singing programme became longer.  This involved starting on Christmas Eve at 8.45 pm in Chilwell and finishing beyond Beeston Station between 5 and 6 am on Christmas Day.  “That was when the then famous Pork Pie Supper at church at 2 am was most welcome.”  It replaced a tradition of supper at a private house.

From 1932 to 1939, the choir was conducted by Eddie Reading, a keen musician and long-serving member of the choir.  He encouraged a high standard of performance.  He left to join the forces in 1939 and then moved away from the area after the war.

During World War II (1939-1945), Harold Sansom took over the choir and the singing continued despite the black-out.  The choir had to take note of the sites of street air-raid shelters in case an air raid took place during Christmas Eve.  As most of our young men were serving in the armed forces, the male section was depleted, but we were able to co-opt older men to balance the harmonies.

From 1949 to 1951, Margaret Cooper, a local teacher and musician (and later a published local historian), became joint conductor with Harold Sansom.  In 1952 Margaret Cooper became senior conductor, assisted by Bert Taylor (a chemist at Boots, who was later formally appointed joint conductor from 1959) and George Bostock (1953-1958).  In the 1950s it was felt that the route covered was too long, so it was decided to concentrate on the area north of the High Road.  In 1955, in order to reduce the duration of the time spent singing on Christmas Eve, it was decided to sing on more than one evening.  Additionally, by the late 1950s, the choir was considered strong enough to operate as two separate choirs for part of an evening.  They combined after supper at about 10 pm on Christmas Eve and sang until around 2 am.  Les Williams took on the role of additional conductor from 1959 to 1971, and George Bostock from 1972 to 1979.

For many years it had been customary for donations to be collected on Christmas Day.  The collectors were choir members, including longstanding member James Pittam, who having sung until the early hours of Christmas morning, would then set out again at 8.30 am to do the door-to-door collection.  Not surprisingly, finding collectors became increasingly difficult.  Thus it was decided in the 1960s to collect en route, excepting the Park Road/Grove Avenue area.  Here, Bob Hooson gave valuable service by continuing the practice of collecting on Christmas Day up until the 1980s – with wonderful results.

In 1976 Bert and Andrew Taylor transcribed some of the carols, completing the entire repertoire in 1980.  Bert Taylor’s introduction summarised the process of selecting among the differing versions of parts sung by experienced choir members:  “In order to preserve for posterity the traditional tunes and harmonies sung by the Choir …, we have now set down rationalised versions.”

By the late 1980s, a regular pattern had been established.  The Carol Choir visited local Care and Nursing Homes on Sunday afternoons during December, sang one Saturday lunchtime in Beeston Square or High Road, and then spent three evenings (including Christmas Eve) singing around the streets, covering an area between Wollaton Road, Beeston, and Grove Avenue, Chilwell.  Typically around 20 singers braved the Christmas weather, with clear frosty evenings being the preferred conditions.  Occasional light refreshments or supper were enjoyed at houses of choir members.  These included the home of Jennifer and Neville Bostock (long-serving member of the choir and treasurer of the Benevolent Society), until Peveril Road and other areas east of Wollaton Road were dropped from the schedule.  David Steggles continued as route secretary, organising the route and collectors, having taken over from his father Sid in 1974, and the annual permission to collect was arranged by Ruth Taylor, choir secretary.

For ten years from 1987 to 1996, singing outside Sainsbury’s supermarket (opened 1987) was also incorporated into the schedule.  This gave good collections for the Benevolent Society but carols were periodically drowned out by the crash of supermarket trolleys being manoeuvred!

The Carol Choir had already made a few relatively local special excursions from the 1950s onwards but ventured further afield when invited to sing in the 1996 “Festival of Village Carols” at Grenoside near Sheffield.  Village Carols received the choir warmly and our singing of our carols was roundly applauded by an audience of more than 400 carol enthusiasts!

By the late 1990s, Margaret Cooper and Bert Taylor had been joined as conductors by Jenny Weir (from 1985), Liz Nesbitt (1993-2006), and Andrew Taylor (from 1997).  In 2005, Andrew Taylor became the main conductor and Hilary Phillips, Mark Ramsey and Ruth Steggles became additional conductors.  Margaret Cooper and Bert Taylor continued conducting until 2007. 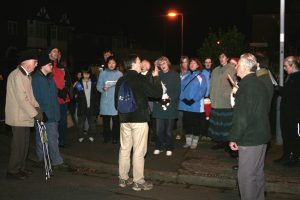 By 2010, the main conductor was still Andrew Taylor, occasionally assisted by Jenny Weir, Hilary Phillips, Mark Ramsey, Ruth Steggles (until 2014) and, from 2010, Serena Lindsay.  After singing on Christmas Eve, supper was enjoyed at the home of Andrew and Glenda Taylor.  Later suppers were hosted by Jen Drinkwater.  The Carol Choir had a wide age range, usually from about 7 to about 90 years, and Bert Taylor still sang on some occasions.  Margaret Cooper, aged 95, also managed to sing with the choir in Beeston High Road in 2009!

In the 2020s, the pattern established in the 1980s continues.  The Carol Choir still sings in Care and Nursing Homes and around the streets of Beeston and Chilwell at Christmas.  The money raised is still given to the Benevolent Society. 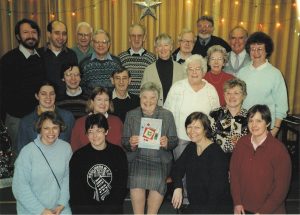 In 1997, Dr Ian Russell, the director of Village Carols, invited the choir to make a recording of its carol repertoire.  Village Carols exists to record and promote local carol singing traditions and it has published and makes available our carols as a CD or tape with an accompanying booklet – all under the title of “Brightest and Best”.  The booklet, CD and tape proved very popular and during 2002 we had some of our carols made into a special recording for the transatlantic market.  In the USA, our recording is also archived in the Smithsonian Institute.

The publication of the Carol Choir’s own book, “Brightest and Best”, and its accompanying cassette tape or compact disc added considerably to the Benevolent Society’s funds, including money from sales in Canada and the USA!

All this has helped increase our donation to the Benevolent Society and has given us the opportunity to make these old carols known to an even wider audience.  How amazed those 1870 singers would be to know of this!

See the lists of Carols and Tunes and of Carol Choir Conductors.  Carol Choir singing dates and places are listed under Events and in the Calendar in the period before Christmas.  The Music section gives general information about Music and Choirs at our church and the Church History section gives further historical background about Beeston Benevolent Society and the church.