At the morning service on January 19 2020 the focus was on the 2 charities, Tree Tops Hospice Care and Breast Cancer Care. Alison Hayward talked about the work of Breast Cancer Care. As £4,000 has already been raised a cheque for the agreed sum of £2,000 was presented to Alison by Maureen Beardsall.

Beeston Methodist Church supported 2 charities, Embrace the Middle East and LIV Village, South Africa for the year September 2016 to August 2017.
Embrace the Middle East is a Christian relief and development charity working in Israel, Palestine, Egypt, Lebanon and Syria. The first specific project was the Princess Basma Centre, East Jerusalem with its rehabilitation outreach programme for children with disabilities and the aim was to raise £ 2,851 to cover the costs of medical consumables, assessment equipment, portable equipment for visits, and educational leaflets and brochures.
As the first target of £2,851 was raised by January, Su McClellan came to the morning service on February 19th to receive a cheque for £2,851. She explained the various ways in which the money will be used to support the work of the Princess Basma Centre. Following Su’s advice we continued to support the Princess Basma Centre with the share of our fundraising allocated to Embrace the Middle East.

Su, on the far left, is with Tony Beardsall, Mary and Gordon Higgins and Maureen Beardsall.
On October 8th a cheque for £5439.00 was presented when Su McClellan was able to explain thanks on behalf of Embrace for the total raised. 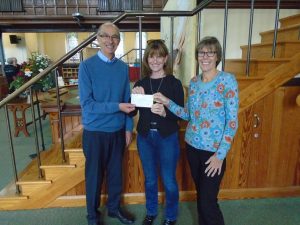 LIV Village, South Africa was  founded by Tich Smith to provide a family environment and education for orphaned and vulnerable children. They should grow up with moral values and life skills to be a generation that will influence positive change within South Africa, Africa and the world.
In July £5,500 was sent to LIV Village and in August £2,000 was given when Tich Smith visited the church. A further £720 was sent in September.
The total raised by September 8th was £16421.39